TO skin regimen so far…

So it has been just over a month since I started my The Ordinary skin regime. I promised an update and here it is. I followed the regimen I posted in my first most for about a month. I also emailed the Ordinary to check I was using the right formulas. The lovely monkeys at Deciem confirmed it was all ok for my skin issues.

There was spot I was fighting with for a few weeks before I started the regimen on my left cheek close to my hairline and just under my cheekbone. It was cystic, it wasn’t too big but noticeable and had become a dark mark. It did not appear to want to go anywhere soon. After I started my regimen it flatted out within a week. My skins also felt hydrated and soft for the first time in years. I mean it felt like it did in when I was primary school (ahhh the days when people used to notice my skin for all the right reasons!).

Four weeks down the line, my skin had developed or regained its lustre. That’s to say my skin felt smooth, soft and it shined. I don’t mean the oil slick shine that I’d been getting but a lustrous shine. Also I noticed I wasn’t getting any cystic acne along my chin/neck area. I was still however getting small spots and comedones near my nose – an area that has always been blemish free. I did some research and dropped the niacinamide. I then bought some lactic 5 to build up tolerance to acids. I read that this was a better for your skin than scrubbing with an physical exfoliator. I have pretty sensitive skin and to be honest I was really scared so I did a patch test and all was fine. I used it on a Saturday night. Nothing happened so that I started using it once a week then twice a week then every day in the PM, then in the am as well. I then introduced azelaic acid which I read was amazing at clearing blemish prone skin. After about two weeks I bought the lactic 10% as everyone was raving about how good it was. I built up my tolerance as with the 5%. All is fine. I use this twice a day now. I still use salicylic acid as spot treatment and if I’m not using azelaic I will put it on all the acne prone areas after my lactic. 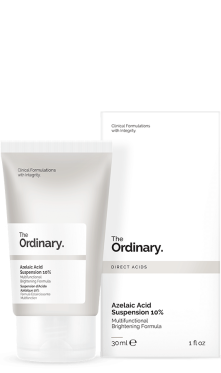 Six/seven weeks in and I have one small cystic acne just under my jaw bone. It hurt for a couple of days but soon stopped. It’s still there and I can feel a tiny bump but it’s not a hard lump so I’m pretty sure it will disappear soonish. I have the occasional small spot which quickly go down. What I have noticed is some comedones on my chin on either side. I’m hoping the lactic 10% will deal with this over time.

I must say I was surprised at how gentle the lactic 10% has been. I am always cautious about any acids so if I think my skin could do with a rest I’ll just put salicylic on and then moisturise.

I have incorporated some other TO products which I will put up in another post as I wanted to keep this post just on my acne prone skin. If you folks are using any of the TO products let me know what you think in the comments below!

(Photo from Deceim website as mine is like a state having been lugged around in my makeup bag!).